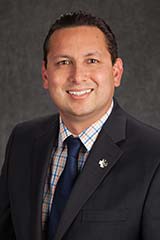 Erik Cazares serves as the Chief Executive Officer at The Hospitals of Providence Sierra Campus. His tenure at The Hospitals of Providence began in 2001 when he joined Sierra Medical Center, now Sierra Campus as a Registered Nurse. In 2008, he transitioned into his first healthcare leadership position as part of then, Sierra Providence East Medical Center’s, now East Campus, start up and inaugural leadership team as the Director of the Telemetry department.

Throughout the years he had oversight and responsibilities over multiple inpatient hospital departments and led the strategic implementation of Oncology, Inpatient Hospice, and Total Joint service lines. In 2018, he promoted to Chief Operating Officer at East Campus and now returns to The Hospitals of Providence Sierra Campus as the Chief Executive Officer.