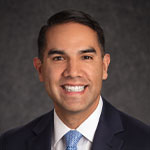 Nicholas Tejeda is the Market Chief Executive Officer and Chief Executive Officer for The Hospitals of Providence Transmountain Campus. The Hospitals of Providence and its affiliates include over 60 access points in the community, including acute care hospitals, a children’s hospital, a surgical hospital, micro-hospitals, freestanding ER’s, urgent care clinics, physician clinics, ambulatory surgery centers, and other outpatient services.

Nicholas is a member of the American Hospital Association (AHA) Board of Trustees, the first such representative from the El Paso region. For two years, he served as the Chair for the AHA’s Institute for Diversity and Health Equity. He is a Fellow of the American College of Healthcare Executives (ACHE) and previously received the ACHE Robert S. Hudgens Memorial Award for Young Healthcare Executive of the Year. The Federation of American Hospitals awarded Nicholas the 2013 Corris Boyd Diversity & Leadership Award and he was recognized with 2020 AHA Board of Trustees award for his substantial and noteworthy contributions towards health equity across the United States. He maintains an Adjunct Assistant Professor appointment with the TTUHSC Gayle Greve Hunt School of Nursing. He also serves on the Boards of multiple community organizations in El Paso.